Eric George is an indigenous academic, community leader and christian apologist based in Auckland, hailing from Polynesian (Samoan/Maori) and European (English/Italian) ancestry. Eric was given the Maori name ‘Ngahoro,’ from his mother’s side and is a blood relative descendent of the Maori sage and historian, Takaanui Tarakawa. He also holds a Samoan matai chiefly title ‘Pei’ (from the village of Neiafu, Alataua Sisifo, Savaii), from his father’s side.

With a background in comparative religion, theology, biblical studies and anthropology, he currently serves vocationally as extramural Assistant Professor of Theology & Biblical Studies with World Wide Evangelical Seminary. Eric has previously been a guest lecturer with Te Wananga o Aotearoa (Social Services) and is pursuing graduate and postgraduate studies in biblical studies and philosophy of religion through Bible University and Nations University.

As a leader in service to his communities, Eric is actively engaged in numerous Iwi committees and is the Vice-Chair of STMA (Samoa Tofia Mai Le Atua) Inc., an NGO focussing on humanitarian aid, education and economic initiatives to Samoa and the wider South Pacific Region.

Eric is an effective communicator and is passionate in presenting down-to-earth, accessible but powerful lectures concerning a wide range of topics, and is no stranger to using humour as a ‘vehicle’ to communicate ideas. Presentations of any length on such topics are available and can be adjusted to be delivered to youth or adults alike.

General Apologetics – “Christianity and Science”, “Is the New Testament Reliable?”, “What Is Apologetics?”

Below are some videos of Eric speaking for The ‘Hope Project NZ’ and ‘The Israel Institute of New Zealand’ respectively:

‘Is Christianity for people who don’t believe in science?’

‘Is there really such a thing as truth?’ 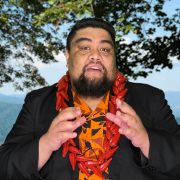