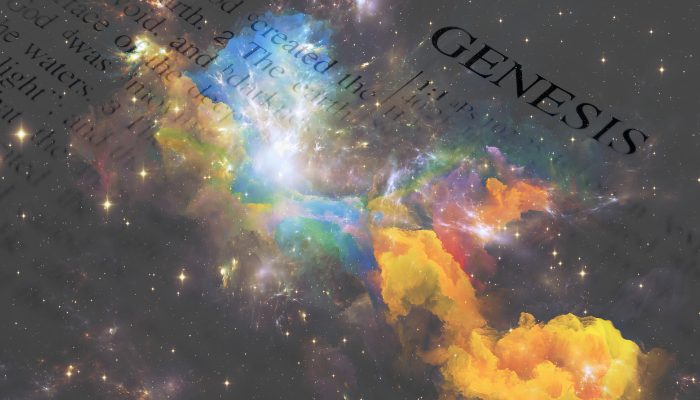 The message of the first chapter of the Bible is arguably the most influential text the world has known.  It introduces a worldview that has shaped the modern world we know.  Without it there would be no modern science and technology, no consciousness of environmental and social responsibility, and no international cooperation for the common good. Human life would possibly be like living in a hostile jungle.

What is the message of Genesis 1?

Its writer and the initial readers, lived in a world uninformed by subsequent history, the Bible and especially modern science.  To understand it, we need to step into their world and their thinking.  To ancients the existence and function of the world was all a mystery.  They called it the heavens and earth. To help make sense of it they told stories of ‘gods’ or powers that influenced and shaped natural phenomena.  They believed a range of ideas along the lines that it is a result of random events involving the interaction of these personal powers.  There was little idea of ultimate origins.

The book of Genesis is historical narrative.  This means it is the story of events reported by those who witnessed them.  Research such as archaeology confirms it is consistent with the evidence and there is no reason to doubt it is accurate history.  The very beginning of the book, the story of creation is an introduction to this history and by nature does not fit neatly into the genre of reported history. It could be described as ‘pre-historical’ truth.

Clearly the story is told in a patterned form.  The repetition in the pattern is there to emphasize the truth being conveyed.  We should give attention to the repeated expressions to see the main meaning.

It is worth reading Genesis 1 in conjunction with this.

At the risk of oversimplifying it, or reading too much into the text, here is what I see are the main points of what it says.

Immediately the readers were confronted by a new idea.  The world had a beginning.  It has not always been there as they had assumed.

God created the heavens and the earth

God, Elohim is a plural yet singular word. It has the sense of the most holy ‘other’.

God exists and is a fellowship, the ultimate diversity in unity. Unlike their ‘gods’ Elohim is not part of the universe but pre-exists it. He is eternal. He made it all.

All that exists did not just happen.  This answers the question, “Why is there something, rather than nothing?” It was purposefully made!  It has meaning! It is not a product of chance processes. It is not just a cosmic accident!

The earth was without form and void

The word “was” has the sense of “becoming” and so could be rendered, “in the process of becoming it was”.   If it was shapeless, “the earth” may well mean, at this stage, “the matter that makes up the earth”, a legitimate use of the word “earth”.

Highlighting formlessness and emptiness is a hint that what is to come is describing two things, the shaping and the filling of the world. There were three phases of shaping called days 1-3, and three of filling called days 4-6.

And darkness was over the face of the deep ……

There was nothing to see yet.  There was the absence of light.  There was no input of what we call energy yet.  This was to come from the “Spirit of God” moving.  Until this comes nothing can change and hence time is meaningless.

This is the first repeated phrase. It is the introduction to each day.  It is the chief clue to the point of each day.   We need to delve deeper.

Words were considered more than mere emissions of sound.  They were powerful extensions of one’s being, communicating information and ideas.  This concept of God’s words, or Word is subsequently developed through the Bible.  For example, Psalm 19 is about God speaking.  The second section of verses (9-11) uses five words to describe God’s word or speech; the law, the statutes, the precepts, the commands and the fear of the Lord. “God said” thus gives the idea that He was putting into place laws or principles which shaped and governed what He created, and that these laws need to be respected and obeyed.  The initial readers would have sensed something of this.

This expression, “then God said” is repeated eight times: eight times of information input into creation, of special creating power as distinct from sustaining power.

Let there be light

Light, piercing the darkness and formlessness, needs to be the first aspect of creation.

When God said “Let there be Light” He was putting into place the principles that hold the universe together, that determine the relationship between what we call matter and energy.

In a similar way to “God said”, the expression “God called” has implications of more than just name-giving.  It implies some power or purpose.  It reflects the idea of organizing and classifying His creation.  Day and night, the arrangement of the sun and stars and the seasons have specific purposes.  They have a reason, God’s reason.

The evening and the morning were the … day

Why ‘evening and morning’ rather than ‘morning and evening’?  The word ‘evening’ has the sense of ‘making obscure’, the onset of darkness, the lack of revelation.  The word ‘morning’ has the sense of unfolding, dawning or revealing.   Thus this expression conveyed a sense of bringing into the light, moving from nothing to something, of lifelessness to being fully alive. It is a wonderful expression of each phase or aspect of God’s creation, bringing ‘cosmos’ out of ‘chaos’.

The first day,  the second day…the sequence of days

God did not create it all at once. God had a plan, a strategy.  It was an organized process. He created the necessary environmental structures before creating the creatures to go in them.

This was not a random spontaneous series of acts.  This was in stark contrast to the spontaneous acts of the capricious gods the first readers or hearers were prone to believe in.  Typical so called “creation stories” of the time were really stories of the conflicts of various gods and princes.  Creation myths from around the world typically involve the conflict of beings such as gods or princes and the subsequent fanciful (from our scientific point of view) creation of some part of the world.  Thus the acts of “creation” were unintended bi-products of the interaction of spiritual beings.

God ceased from His creating.  This suggests that there is a distinction between His supernatural information adding and creative activity, which was the subject of His work in the 6 ‘days’, and His ongoing sustaining activity that continues throughout and into the ‘day of rest’.  It is the investigation of this sustaining power that constitutes science.

500 years ago, through the invention of the printing press and the subsequent reformation, the Bible became available in common languages to the people of Europe.  Before this the Bible was in limited supply and could be read only by the church hierarchy who could read Latin.  Now literate people could read it in their own language and with an open mind to discover what it really said.  Genesis was rediscovered, read and believed.  People rediscovered that this world was made by God and continues to exist by the power of His word.  They read in the Bible that all things hold together by His power. They realized it runs on God’s orderly principles, and that God invites us to listen to His voice in creation.  So Christians began the quest of discovering these principles.   God’s sustaining work as revealed in Genesis 1 became the subject of what became known as scientific investigation.

Pioneers of this scientific thought realized that a pantheistic world view inhibited further discovery.  Men like Johannes Kepler, the father of astronomy surmised that we could think God’s thoughts about the cosmos too.  The majority of the many ‘fathers’ of modern science (e.g. Isaac Newton, Michael Faraday) were theologians, pastors, church leaders, Christian philanthropists and the like, who wanted to ‘think God’s thoughts after Him’, studying God’s book of works (nature) along side of God’s book of words (the Bible).  They saw their scientific discoveries confirming Genesis 1.  Science is listening intently to the voice of God in creation.  Thus, Genesis 1 and the Bible became ‘the mother’ of modern science and technology.

The world will never be the same again – because people seriously believed Genesis1.

Norsworthy J, Why Science Matters, What does the Bible say about things scientific, (2018), ConsultEd , Tauranga, NZ.