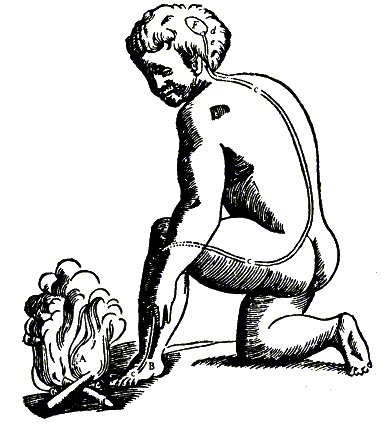 This is my fifth and last post in a series on the Argument from Consciousness—the basic form of which should by now be familiar. The argument begins by presenting properties of consciousness which cannot in principle be reduced to the physical. It then argues that the existence of conscious agents with these mental properties implicates the existence of a Nonphysical Conscious Agent as their originating cause.

My previous four posts have presented four of these properties (qualia, intentionality, privileged access and nonphysicality) and demonstrated that they are in fact insusceptible of reduction to the physical. And since the last property—libertarian free will—is one that I have already addressed on this blog in a previous post, the reader familiar with that post is ready to consider how irreducible metal properties constitute evidence for the existence of God.

The Bible, moreover, teaches that God created man in his image. For this reason Abrahamic theists have a priori grounds for expecting irreducible mental properties to be instantiated if God exists. [2] It is no surprise on theism that our most novel and essential feature, our mental life, should be irreducible to the physical. And this is because it is imparted to us by our nonphysical creator. Free will, too, is provocatively suggestive of the imago dei since if man exercises libertarian causation he instantiates in miniature the principle of uncaused causation imputed to God in classical theism.

In Is There a God? Oxford professor of philosophy Swinburne finds further a priori grounds for expecting the existence of conscious agents on theism: If God is unlimited in power and intelligence, it is certain that he could create a universe that contained conscious agents; and if He is perfectly good, it is reasonably probable that He would. Writes Swinburne,

We have some understanding of what a good person will do. Good people will try to make other people happy, happy in doing and enjoying worthwhile things (but not happy in causing pain to others). Good people try to help other people for whom they are responsible (for example, their own children) to be good people themselves. Good people seek to share what they have with others and to cooperate with others in all these activities.

God, in other words, might reasonably be expected to create a universe in order to share with us the good things He has—a mental life, knowledge, freedom, love. All of these things require consciousness. And if all humans are to have access to the greatest good of all, knowledge of God himself, they will need to be able to develop sophisticated metaphysical and theological concepts which will require rational intuition and to undergo religious experiences which require conscious perception. It is therefore credibly probable that agents with these abilities will exist if there is a God but incredibly improbable that they would exist if there is not. [3] The benevolence and omnipotence of God therefore stand in the same relation to the hypothesis that God created conscious agents as John’s debt and criminal past to the hypothesis that John robbed the safe: They are factors that belong outside the scope of the hypothesis but increase its probable truth.

I conclude that the existence of conscious agents with irreducible mental properties provides evidence of two kinds that there is a God who created them.

[1] I am quoting Anthony Flew writing in There Is A God.

[2] We need evidence of John’s criminal past before it can give us reason to expect him to have robbed the safe. Likewise, without independent reasons for thinking that a supreme being of the sort described by classical theism exists, this part of the argument would have no force. However, such independent reasons are available to the proponent of the argument—such as the nine lines of evidence for bare theism presented in Part II of this apologia. Thus the prior probability of the existence of God on evidence X (where God, if he exists, may reasonably be expected to create conscious agents whose existence is otherwise without available explanation) means that X makes the existence of conscious agents more probable. And since the existence of conscious agents with irreducible mental properties also makes the existence of God more probable a posteriori, the coincidence of the two kinds of evidence makes it very probable on the total evidence that God exists and created conscious agents with irreducible mental properties.

[3] Incredibly improbable since, as we have seen in the previous four posts, postulating that mindless particles organised by mindless forces is all that exists leaves us without the explanatory resources to account for our mental life. And of course this is no small matter: That we have a mental life of thoughts and perceptions is the most fundamental fact of human experience and the starting point for every other kind of inquiry.