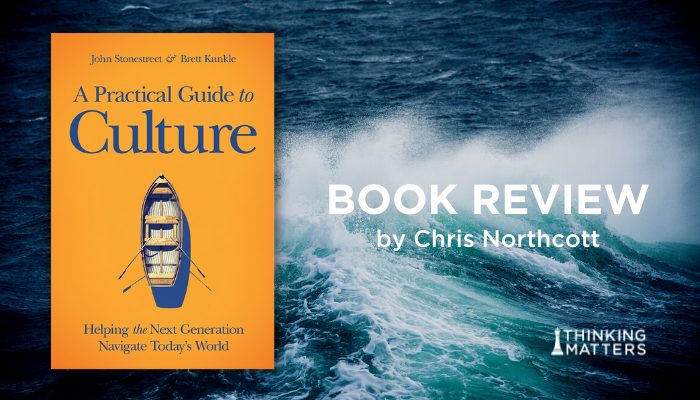 Children from families who have immigrated are often said to be caught between two cultures. They belong to their parents’ culture but grow up within another. It can be a tricky tension for them to navigate as they often wish to be faithful to their ‘home culture’ as well as fit in with their adopted culture at school and with their friends.

Children from Christian families growing up in New Zealand could likewise be called “two culture” kids, because they face a similar tension. In one way or another, they ‘belong’ to the Christian faith as a culture inherited from their family. But they are also members of their wider societal culture which at points pressures them to compromise their inherited Christian culture. While not all children from Christian families maintain their family’s faith, the need to navigate the tensions between their two cultures remains.

John Stonestreet and Brett Kunkle’s A Practical Guide to Culture: Helping the Next Generation Navigate Today’s World is exactly what it says on the cover (even if it explicitly identifies neither the “next generation” or “today’s world”). It is not so much a book for young Christians themselves to read, although it would certainly be helpful for them. Rather, it is for parents, caregivers, mentors, and youth workers who wish to see the young people under their charge make their way through a changing society with their increasingly alien faith intact. Most encouragingly, it is, as the title states, practical. It is no book of intellectual theorisation. Stonestreet and Kunkle write for people at the coalface of raising and guiding youngsters – but leave ample sources for further reading to those who want it. It is written within and for North American culture, but it serves well enough for other western cultures too.

The book achieves its purpose via four parts.

The first part of the book is the most theoretical. It gives its readers the reference points for what follows by describing what culture is and what it is not. The authors suggest we must consider culture within the context of the Christian faith, and not vice-versa, as well as clarify what success in Christian living will look like in our particular time and place. To do this, we must also understand Christian faith well. For this reason the authors take the time to lay out the main contours of the grand narrative of the Bible, as well as raise the question of what is our place and purpose within it. It is not enough to know what isn’t right with our culture – to be helpful guides we do need to understand not only where we are, but also where we have come from, where we are going, and how we will get there. That is the purpose of part one.

This first section is worth taking some time to read as it will help to understand the theory that lies beneath the practical stuff. It is important for understanding what is driving cultural issues at a deep level – perhaps akin to diagnosing the cause of an illness rather than merely band-aiding the symptoms. One thing that is useful is the breakdown of a culture into its constituent parts and functions: ideas, consequences, champions, artefacts, and institutions. These are helpful to remember as specific issues are raised later in the book.

Part two identifies four elements of our culture that shape it at a deep level. These are things that tend not to be noticed and tend to be causes rather than symptoms. These are not the only four drivers operating beneath the surface level, but they have been selected as they have a higher relevance for young people. These are: 1) the torrent of information presented to people daily, 2) the lack of societal agreement over what it means to be human and what life and community is for, 3) the impact of social media upon community and relationships, and 4) the problems caused by prolonged adolescence and the reluctance or inability to transition properly into adulthood.

The third part of the book is titled “Pounding Cultural Waves”. Announcing that it is now “time to get really practical”, the authors “tackle eight contemporary cultural challenges that are pounding away at our young people” (p. 153). The eight challenges are as follows: pornography, casual physical intimacy, sexual orientation, gender identity, affluence and consumerism, addiction, entertainment, and racial tension.

Each chapter within this section follows a set pattern. First, an overview of the issue and some relevant statistics are given. Following this is a section titled “Don’t Buy the Cultural Lies”, where false ideas are uncovered – for example, the idea that pornography is a harmless expression of sexuality, or that what we own defines who we are. The third sections are titled “Recapture the wonder of God’s story”, which aim to provide a positive affirmation of biblical truth – for example the peace and satisfaction in God that should allay our desire to own more and more stuff; or the depiction of what it means to be human according to God’s design, together with the solution when things when human existence fails to live up to how God first made it. After this some “Action Steps” are provided which give some practical and concrete suggestions for parents and mentors. The fourth major subsection to each of these chapters is called “Hopecasting”, where the authors point to signs for hope in the present which demonstrates instances of real turnarounds where we can see that God is at work and things are changing for the better. One example I particularly liked was about a group of university students who organised a ‘Real Sex Week’ event at their campus as an alternative to the ‘Sex Week’ organised by another student group. Rather than focussing on crude and casual sex, they provided talks on beneficial sex education. Each of these chapters concludes with a very short list of resources for further exploration and suggested questions to facilitate discussion.

The four short chapters of the fourth and final section is called “Christian Worldview Essentials.” These are a selection of topics that cap off the book by addressing some Christian formation issues the authors felt needed special treatment. These are: 1. Understanding God and reading the Bible well; 2. Why to trust the Bible; 3. Living and proclaiming Christ in a religiously plural culture; and 4. Engaging positively with our culture. Each of these presents the topic in an accessible way that assists parents and mentors to help young people live faithful Christian lives in our present context.

The fourth of these chapters (on positively engaging our culture) explores four questions worth recounting here: What good can we celebrate, protect, promote, and preserve? What is missing that we can contribute? What evil can we stop? What brokenness can we restore? The ideal the authors strive for – and which Christian parents ought share – is for young people not simply to survive adolescence with their faith intact, but to make a difference with it.

Thumbing through this book as I write this, I feel that what I have written doesn’t really do justice to the helpfulness of this book. It is simple to read (as its authors intended it) but carries a lot more deep insights than could appropriately be crammed into a post like this. There were many quotes and thoughts I had marked that would have been great to have shared, but these I will have to invite the reader to find for themselves. This book deserves more than a swift read through. Although it is an easy read that could be completed quite quickly, the real payoff will come with thoughtful reading, discussion, and follow-up of the sources for further reading (some of which are available online). I leave the reader with my commendation of A Practical Guide to Culture and invite them to see for themselves its usefulness for Helping the Next Generation Navigate Today’s World.

This books is available in our store: A Practical Guide to Culture: Helping the Next Generation Navigate Today’s World