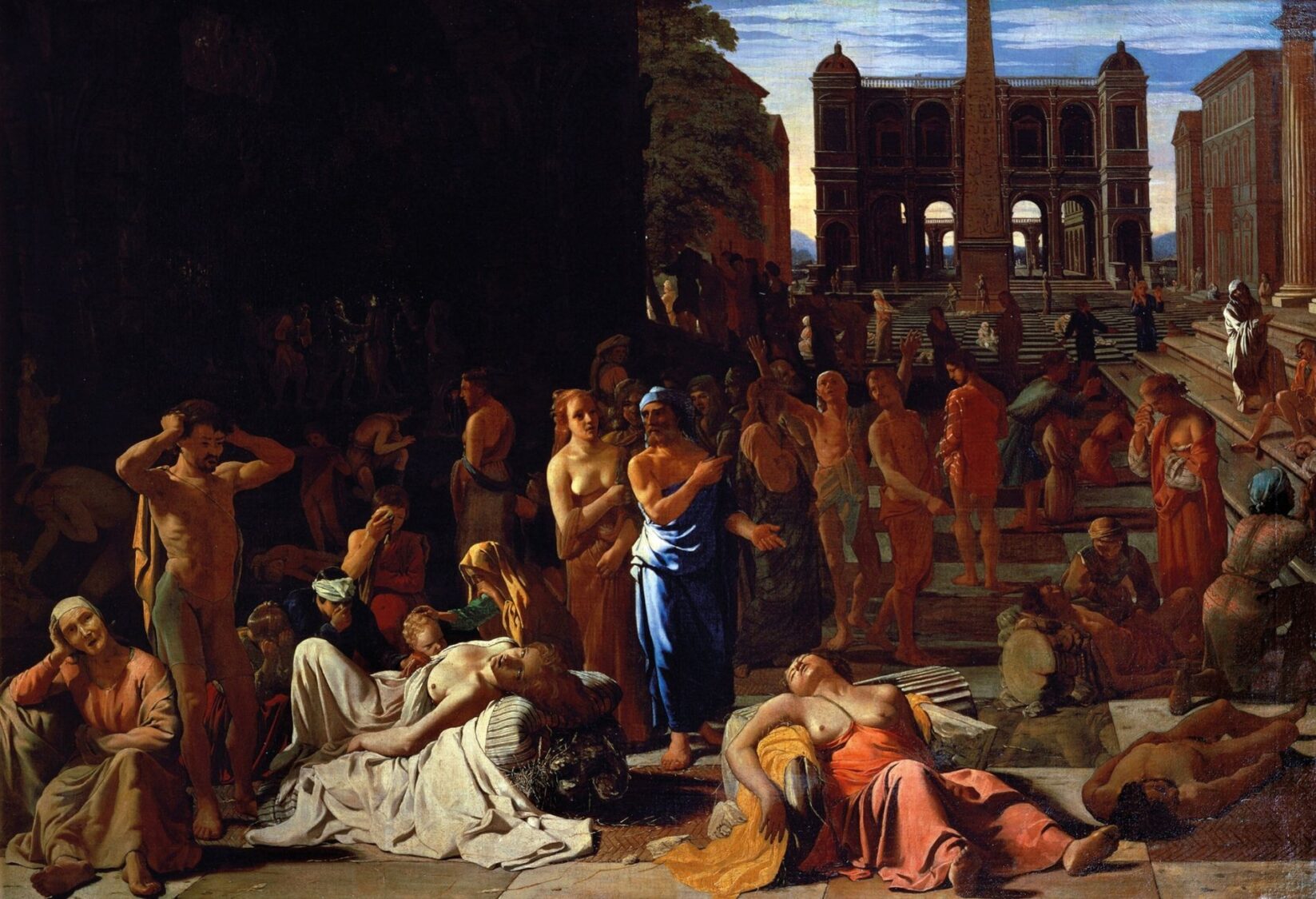 Around A.D 165, news came to the city of Rome of a new infectious disease spreading from the east.  Infectious diseases were part of life in those days, but this one, was different.  It came with utterly gruesome symptoms, including fever, chills, nausea, vomiting and diarrhea  It snuck up on people as the symptoms typically showed up two weeks or so after it had been contracted.  Its signature characteristic was the development of horrible black pocks over the body. They formed scabs which left disfiguring scars.  It became apparent that these pocks formed inside the alimentary tract too.  Diarrhea turned from red to black as the disease lingered in the body.  Often victims would cough up or excrete scabs. Suffering would continue for two or three weeks before the illness finally subsided or killed them.  It was apparent that Rome was experiencing smallpox.

The plague came in waves for a generation, and killed possibly as many as 10% of the people of the Roman Empire. Armies were decimated and wars were called off.  It swept through all strata of society.  In the year AD 189, it was reported that about 2,000 people died per day in the crowded city of Rome.

Most of all, the disease spread fear.  People implored the gods to save them.  The masses of people who were not aristocrats received no help to ease their suffering.  Thousands were left abandoned on the streets and in the fields to suffer and die. No-one wanted to go near them. Even their own families, if there were any of them left, abandoned them.  Apparently, the gods had seen fit to torture them to death.

What did Christians do in this situation?   We presume some who named the name of Jesus just melded into the milieu of the population.  But there are records of others who had a significant impression on the whole empire!

In the middle of all this horror there were a few people out in the streets caring for the sick, feeding them, washing them and when necessary burying them.  Somebody cared!  In the mid 3rd century, when the plague hit again, groups of these people cared again.  These people were risking their own lives to care for those struck down with the plague.  They carried the rejection of others because they cared for ‘the living dead’.  Who were these people?

These risk takers were known to meet in their houses.  They were apparently not religious in the overt sense.  They were not into routines of rituals and rules to please the gods.  Some called them atheists – meaning ‘without gods’.  They were despised by many, especially the aristocrats because they would not bow in worship to them or to the Caesar.  They were not weak-willed, as they were prepared to take a course of action that would incur the wrath of the state.  In an age when education was only for the elite, they educated their own children to think differently.  They cared for the sick and vulnerable.  It appeared that they lived according to a radically different world view.  Their ideas about what is real, about what is right and wrong, about what is valuable, about caring for others were strangely different!

Many people were intrigued and sought to find out why they were different.

Why was their attitude and practice so different?

They discerned the times and knew what to do.

As Christians they would have sought God as to how they could seize the day – redeem the time (Eph 5:15).

If there were Jews in their community, they would have had access to the Jewish scriptures, to the law of Moses, the law code that the ancient people of Israel were to live by.  They would have gleaned from that God’s heart for his people. They would have understood that God wanted his people to not suffer the diseases of the world.  As God said when Israel were to receive  the Law:  ‘If you diligently listen to the voice of the Lord……I will put none of these diseases which I have brought upon the Egyptians, for I am the Lord that heals you.’ (Exodus 15:26).

And they would have been made aware of  Leviticus 13 -15, the chapters dealing with what to do about infections.  Remember these instructions were given thousands of years before there was an understanding of what we call microbiology.  The passage begins with The Lord said to Moses and Aaron.  Moses and Aaron did not have much if any understanding of how infectious diseases were transmitted. They were merely the messengers. The people of Israel did not know the scientific laws of God to live by, but they had God’s special revelation to them, the Law of Moses to heed and obey.  And so all their actions were to be done in the context of their obedient relationship to God.

So what were they to do about infections? Here is a summary:

I cannot but be in awe of God’s instructions to the ancient Israelites, as they are so similar to the instructions we are given in the light of modern medical science!

These early Christians would have listened to and read the instructions of the apostle Paul about what to do about the laws of civil authorities.  Passages such as Romans 13 told them that they should obey the authorities as they are Gods servants to us for our good.

And they would be totally familiar with the teachings of Jesus to, above all else, love God and love others.  “..by this shall all people know that you are my disciples.”  This boldly addresses the motivation behind their action.

The gist of the moral instructions in the whole of the Bible and particularly in the New Testament was their motivation to outwork their love for God and others with practical action.  Their love for others moved them to  care for the poor, the vulnerable, the sick.  They knew that inevitably their love would result in some of them dying with the disease.   But their love was seen and so drew many to know Christ.

So what should we do in the context of the current pandemic?

We have the added dynamic of governments attempting to protect the vulnerable by legislation.  Christians have reacted to this in a variety of ways.  Some have declared that these responses are unnecessary dictatorial actions of power hungry governments and international organisations.  While many others have rejoiced in the fact that governments have put into place action which reflect the value that we should have of the lives of the vulnerable. Lives do matter more than the temporary health of the economy.

What does the Bible have to say about how to live in situations like this?

Some who have the former of the two reactions above tend to immediately go to the book of Revelation and begin to think in terms of the beast and the antichrist.  Maybe?  If this is relevant to the current situation then the instruction of what we do is clear.

This calls for patient endurance on the part of the people of God who keep His commands and remain faithful to Jesus. (Rev 14:12)

In summary, as Christians, this is what we should do:

Do not be a fear monger!

Do not dwell on the negative!  Think on (make your thought life feed on) that which is good. Phil 4:8

Do not judge others who have a different response to you!

Here is a paraphrase of Romans 14 adapted to this issue:

Accept those who struggle with their faith without quarrelling over disputable matters. One person’s belief allows them to be vaccinated, but another who struggles with this does not.  The one who has no problems with it should not look down on the other, and the one who does not must not judge the one who does, for God has accepted us all.  Who are you to judge someone else’s servant? To their own master – for us that’s the Lord – servants stand or fall. And they will stand, for the Lord is able to make them stand.  Each of them should be fully convinced in their own mind. Whatever they do they do so to the Lord. For none of us lives for ourselves alone. We all belong to Him. Its between us and him.

Heed the truth.  Discern and listen to voices that are telling the truth!

Follow the wisdom of those who know the truth, especially when it lines up with the practical wisdom of the word of God.

Be very careful then how you live – not as unwise but as wise (informed by the truth, and knowing what to do) making the most of every opportunity, because the days are evil. (Ephesians 5:15,16)

Don’t disobey the law unless it is forcing you to disobey the clear instructions of the Lord.

Seek to bring glory to the name of Jesus.

Love God and love others.

Seek God as to what He wants you specifically to do.

Seek out those who are doing it tough in the current context.  Encourage them. Be positively proactive!  Pray for them. Practically help them.

In doing so some will be attracted to the One who motivates you to love them.